You are here: Home / Clubs / The Beauty of Table Topics

Cherisse Branch was disappointed being in third place of her division. It seemed an insurmountable deficit with only the interview 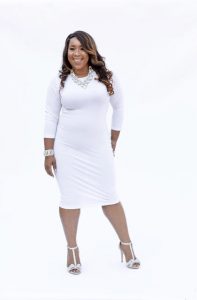 event remaining. Cherisse had prepared for six months for the South Carolina Plus America Pageant. She started with the Miss Blythewood crown; preparations culminated at a boot camp weekend which prepared participants for the state pageant.

The talent event opened, and since this is a Christian organization, Cherisse opted for a well-rehearsed praise dance. “I felt defeated with my third-place finish; I knew I had lost the contest,” she recalled, “but I still decided to do my best in the question and answer segment.

At this point, Cherisse put the third place talent finish behind her and rekindled her original dream of reaching first runner-up in MS division. Instead the mistress of ceremonies announced the winner in MS category was Cherisse Branch. “I was in total shock. All I could do was look at my family with my eyes full of tears,” Cherisse remembered.

Still, there was more to come. Next the pageant crowned the queen supreme winner, the person with the highest total score during the pageant. Cherisse was crowned yet again. Next the member of Millennium Toastmasters Club will head to Dallas, Texas in July for the final of the National Plus America Pageant.

“I am grateful that I chose to join Toastmasters,” said Cherisse. “I know in my heart they played a vital part in me becoming MS South Carolina Plus America Supreme 2017!!”

Serving all Clubs in South Carolina

Get in touch to find out more information or to reserve a speaker.